The Silent Lambs dominated their first game of the 2010 season soundly after a slow and close start versus the Circle City Socialites of Indianapolis. Circle City held the lead for much of the first half, as their pack held the Lambs to single digit jams until the last jam of the half. Meanwhile, CCS jammer Fly scored a big 14 point jam, and it looked like all the momentum favored the visitors. However, a few key mistakes by the Socialites that sent jammers to the box allowed the Lambs to creep back in. On the last jam of the half with a starting score of Lambs 29 – Socialites 27, Wheezy scored 20 unanswered points to end the half and put the Lambs way ahead. Halftime score was 49-27, and that proved to be all the Lambs needed, as in the entire second half the Socialites could only muster an additional 5 points while the Lambs more than doubled their first-half score.
In the second half, the offense and defense both came alive for the Silent Lambs. Celia Graves held down the rear of the pack and made it difficult for Circle City jammers to even reach the pack. This allowed the remaining Cincinnati pack players to focus on a more offensive game, and work on jammer assists, opening holes, and distracting Circle City blockers. Despite this, Spleana Rupture and Beatie Sedgewick for CCS were able to do plenty of damage to the Lamb blockers. Geez Louise also had a stellar performance in the pack, and Bex Pistol made a statement not only as a jammer but also as an effective blocker in limited pack play.
Each team voted for their opponents Most Valuable Player, and blockers for both teams were recognized with this honor. Faye Stunaway earned MVP for the visitors, and MirderHer was the Lambs’ MVP. High scorers were Wheezy for the Lambs with 35 (5 points/jam) and Fly for Circle City with 16 (2.29 points/jam). Miss Print earned a remarkable 100% lead jammer in 5 jams.
» Check out photos from the game here 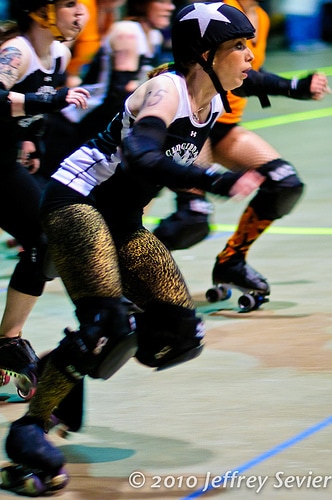 The main event of the night started with the Black Sheep dominating at first, opening up a 14-0 lead over the visiting San Diego Wildfires. By jam 7, the Sheep held what looked like a solid 31-12 lead, but in the next nine jams Cincinnati was outscored 41-8 to put the Wildfires in the lead. After that the game featured a series of lead changes (four according to the score sheets, although that does not reflect in-jam lead changes) and was close throughout, as expected from two closely ranked teams. Back to back double-digit jams from Lethal and Ouchocinco, respectively, again put the Sheep up heading into halftime with a score of 72-61.
The second half started strong for the Black Sheep, who were able to extend their halftime lead to 85-66 after three jams, but after that they struggled to score. Ultimately, it was jammer penalties that proved to be the downfall for the Sheep, combined with textbook pack play, speed control and conservative strategy from the visiting blockers. In the second half, San Diego outscored Cincinnati 68-36.
Sadistic Sadie jammed defensively whenever she put the star on her head, and that proved to be an unwise strategy against this smart and veteran Wildfire team. Although Sadie is probably the best defensive jammer playing today, Bonnie D. Stroir displayed amazing tenacity and agility in countering. Despite strong blocking by Sk8 Crime and Sk8r-Kinney and Killian Destroy’s arguably best-ever game, San Diego’s jammers maintained cool heads and hot wheels throughout to persevere.
K Lethal led Cincinnati scorers with 37, followed closely by teammate Hannah Ouchocinco who had 35. San Diego scoring leaders were Bonnie D. Stroir with 42, with Steely Jan and Kiki DiAzz both earning 35. Cincinnati topped San Diego on lead jam percentage, but also nearly doubled their total penalty minutes. MVP honors were awarded to Slamurai for San Diego and Sk8r-Kinney for Cincinnati.
Both the Sheep and the Lambs are back in action at the Cincinnati Gardens on April 17, when they will host St. Louis’ Arch Rival Roller Girls in doubleheader action. Stay tuned here for game previews and more information.
» Check out photos from the game here and here
» To get tickets for the April 17th game against St. Louis, click here
» To read the the entire boutcast and view video archives of the game online, visit Derby News Network and Justin TV