Caesar is back with another in depth analysis of the Cincinnati Rollergirls upcoming games. This weekend, both the Black Sheep and the Silent Lambs will be heading out of town to take on the Grand Raggidy Roller Girls. If you’d like to make a road trip to Grand Rapids, Michigan to cheer us on, click here for tickets. Can’t make the trip? Check CRG’s Twitter and Facebook pages for updates.

For the second consecutive week, the Cincinnati Black Sheep face a top 10 regional opponent in a game that could have tournament implications down the road for both teams. Just one week after knocking off the #8 team in the North Central Region of the Women’s Flat Track Derby Association, the Arch Rival Roller Girls, Cincinnati will get a shot at the #10 team. Like St. Louis, the Grand Rapids team is no stranger to the Black Sheep. Saturday’s meeting between these teams will be the fifth in the series, which so far has been all Cincinnati, who own four solid wins over the Michigan team.
On paper, this looks like the easiest version of the Grand Rapids team that Cincinnati has faced yet. Several key, standout players from this team have moved on to other things, and that leaves them somewhat short on experience. Mira Maheiny came out of retirement late last year, and she poses the biggest threat for the Sheep offensively. Lindsay Blowhan and the feisty Tone Loco will be a handful for the Cincinnati blockers to deal with, and Bette Mangler as a pivot is arguably the most important player on the roster. She matches well with a player such as Sk8r-Kinney, usually playing pivot and controlling the front of the pack.
Despite losing so many strong players recently, Grand Rapids has been able to stay in the top 10 of regional rankings, and thus remain in the mix for a tournament berth. They were able to hold on against a very strong Naptown (Indianapolis) team back in February, winning that game by 10 points. They also beat Ft. Wayne and Columbus’ Ohio Roller Girls recently, and in fact haven’t lost since last years’ regional tournament.
The Black Sheep continue to gel as a team, incorporating newer players and adjusting their strategy to match current team strength and weaknesses. There is only one roster adjustment for this matchup, as Celia Graves will be playing in her first game with the Black Sheep, substituting for Killian Destroy. Based on her performance with the Silent Lambs this season, she will mesh well with the more experienced Black Sheep. Other than that, Cincinnati will just have to keep playing the way they have been to bring back another win heading towards the May 8 home match-up with the Chicago Outfit.
Cincinnati Black Sheep: 333 Buckhead Betty // 6 ft. Under Celia Graves // 15 Dr. McDerby // 85 Hannah Ouchocinco // 21 June with a Cleaver // 83 Jungle Lacy // 187 K Lethal // 3 Karma Krash // 86 Nuk’em // 76 Sadistic Sadie // 66.5 Sista Sacralicious // 69 Sk8 Crime // 11 Sk8r-Kinney // 5 Trauma
Grand Raggidy All-Stars: 00 Bette Mangler // 98 Costa Lotta Chaos // 88 Garden Ho // 13 Hodi Chitt // 01 Lindsay Blowhan // 77 Lucy Morals // 22 Mira Maheiny // 19 Rue Dedaye // 29 ShamPain4U // 28 Shutter Speed // 41 Tone Loco // 33 Trashy Twolips // 36 Viva La BOOM // 35 X Libris 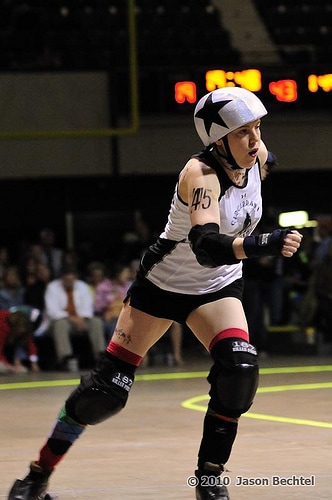 Being a smaller market, the depth of the Grand Raggidy teams don’t compare favorably to Cincinnati. As such, the B-team G-Rap Attack looks to be a big underdog against the Silent Lambs. If that holds true, it will be a great opportunity for the Cincinnati coaches to test some new strategy and lineups with these Lambs, and evaluate players for rosters for the remainder of the season. The Lambs are taking a smaller roster to Michigan than what they are used to playing with at home, so it could be a key opportunity for new players such as Penni Pusha, Poppy Chulo and Bombtrack to get more playing time. Wheezy and Miss Print should be able to put up big numbers as jammers, and Geez Louise and Nik Jagger have a chance to pad some assisting and blocking stats against this inexperienced Grand Rapids squad.
Cincinnati Silent Lambs: 45 Bex Pistol // 1-2-3 Bombtrack // 0 Cherry Choke // 88 Diamond Kut-Her // 20 Geez Louise //M1A1 Maime // 9.5pt Miss Print // 94 Nik Jagger // M16 Penni Pusha // 38 Pistol Whippin’ Wendy // 63 Polly Rocket // 43 Wheezy // 739.27T213E The Librarian // 27 Poppy Chulo
G-Rap Attack (numbers not available): The Brixton Bomb // Costa Lotta Chaos // X Libris // Curvy Dog // Busty BraBender // Brassy KnuX // Officer Pain // Rosie Root Canal // Kelsey Slammer // Keisha Mei Ash // Kickin’ Fried Rice // Roni U. Over // Greedy Reedy // Daisy Hatchett // Red Hot Redneck