Even though the Cincinnati Rollergirls’ home season ended in June – when the Black Sheep defeated Milwaukee’s Brewcity Bruisers 139-71 and the Silent Lambs fell to Evansville’s Demolition City Roller Derby 79-52 – neither team has taken much of a summer vacation. Both teams hit the road for away games, racking up a mix of wins and losses to bring the Black Sheep’s record to 9-3 on the season (8-2 in Women’s Flat Track Derby Association-sanctioned play) and the Silent Lambs to 5-5. Here’s a recap of the travel season action.

June 26, Atlanta: Both teams traveled to Georgia to take on the Atlanta Rollergirls, then ranked 3rd in the Women’s Flat Track Derby Association’s South Central Region and 18th worldwide by Derby News Network. After the Silent Lambs defeated Atlanta’s Rumble B’s 153-111, the Black Sheep beat Atlanta’s Dirty South Derby Girls in a game that came down to the final jam. The Sheep were down by 11 points at the start of the jam, and then Cincinnati blocker Trauma forced Atlanta’s jammer to draw a major cutting the track penalty, allowing jammer K. Lethal to put up 20 points and win Cincinnati the game, 126-117. Read the archived boutcast on Derby News Network and watch the video of the game here.
July 31, Chicago: Cincinnati’s Silent Lambs were dealt their second defeat at the hands of the Windy City Rollers’ Second Wind, who were also victorious at the Gardens in 2009 (when they were known as the Nadabees). Though the Lambs mounted an impressive comeback after the Second Win went on a 53-0 run in the first 17 minutes of the game, it was not enough: The Second Wind maintained their comfortable lead and won 184-96. Read Windy City’s recap here and a fan recap here. 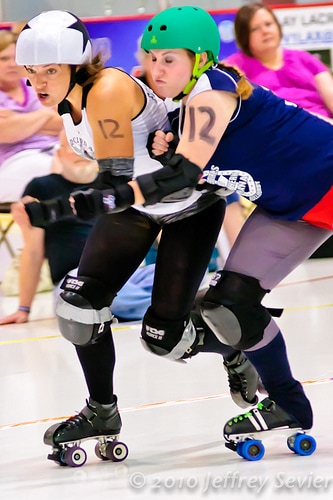 August 7, Evansville, IN: With a roster of just 12 skaters due to injuries, the Silent Lambs fell to the Rollergirls of Southern Indiana, 101-50. After a few lead changes in the first half, ROSI had the edge at halftime and widened it in the second half to take the win.
August 21, Kansas City: Both teams made the long trek to Missouri only to come home with two hard-fought losses against the Kansas City Roller Warriors, ranked 18th by Derby News Network to Cincinnati’s 19. Kansas City’s All-Stars led for most of the game against the Black Sheep, although a 30-point power jam by Cincinnati’s Trauma propelled the Sheep to a 10-point lead in the first half. But Kansas City recovered during a subsequent power jam in their favor and never lost the lead again, winning 168-128. This game also marked the Black Sheep debut of Wheezy, who joined the Cincinnati Rollergirls late last year. The Silent Lambs’ opening 40-minute game against Kansas City’s Plan B was marked by multiple lead changes, but Plan B ultimately emerged victorious, 87-81.
August 28, San Francisco: The Bay Area Derby Girls’ All-Stars, ranked 6th in WFTDA’s West Region and 14th by Derby News Network, came away victorious in their first meeting with the Black Sheep, 174-65. It was the Sheep’s biggest loss to date this season. Read a recap on Derby News Network.
While the Silent Lambs have no more scheduled games this season, the Black Sheep are headed to WFTDA’s North Central Regional Tournament, Thunda on the Tundra, as the No. 4 seed. Check back here for a preview of the weekend’s match-ups.