After splitting their March 8 home season opener with a Violent Lambs win and a Black Sheep loss, the Cincinnati Rollergirls will travel to Indianapolis on March 15 to play a perennial opponent, the Naptown Roller Girls. Tank recaps the home opener and previews the Naptown double-header.

One of the greatest sports movies of all time is the original Rocky. Before Sylvester Stallone was snapping wrists in Over the Top or trying to figure out how the three seashells worked in Demolition Man (shout out to Wesley Snipes with a blond flat top), he wrote and starred in this timeless classic about a boxer who accepts the seemingly impossible challenge of trying to defeat the heavyweight champion of the world.
Very few people give him any chance of winning, but Rocky goes toe to toe with the champ, Apollo Creed, for multiple rounds. After a brutal war that leaves both men busted, bruised and broken, Creed wins the fight by a split decision. Even though Rocky lost the fight, he wins mentally and emotionally as he proves to himself and the world that he could hang with the best in the world.
Watching the Black Sheep lose 217-104 to the Brandywine Roller Girls Belligerents on Saturday night wasn’t exactly like Rocky, since no one drank a half dozen eggs on the bench between jams. But I did see something positive: I saw hope.
The past few years have been a real roller-coaster ride for the Cincinnati Rollergirls. The game changed, but they didn’t – well maybe a little, but not enough to keep up with the top teams in the world. They were technically a team, but in reality the Sheep were a pieced-together collage of individuals. Teamwork was in short supply, as players would try to make plays on their own, which would then lead to desperation hits, which always seem to lead to penalties, and penalties lead to being listed in the L column in the paper the next day.
Over the course of the past six months, close to a dozen players have left the team for various reasons. And with the team starting 0-3 so far this season, it might surprise you to read that I think things are looking up. Allow me to explain.
On Saturday night, I saw something that I wasn’t used to: I saw the Black Sheep play as a team. They trusted each other, they didn’t yell at each other, they formed walls, and they weren’t playing the second half with two players in the pack and two in the penalty box constantly. The fact that we are seeing this type of communication and cohesiveness in the pack this early in the season is a sign of good things to come. Roller derby is a team sport, and the only way to stop top-level jammers is by playing together in the pack. 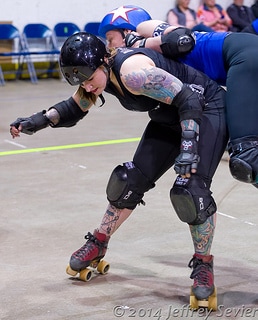 The Nuk’em (left), Kitten Kicker, candyKICKass!, and La Bruja pack was my favorite of the night, as they worked together extremely well. Nuk’em has matured greatly as a player this season as she continues to use her superior skate skills to pin down jammers and talks to her teammates, reminding them to stay calm. She was already great, but if she continues on this trajectory, the sky’s the limit.
The jammer rotation is still a big question mark as we roll into the fourth sanctioned game of the season this Saturday against the Naptown Tornado Sirens in Indianapolis. A lot of different players had a chance to wear the star but no one emerged as the obvious No. 1 jammer in the rotation, although Sailor Scary had an impressive performance, moving quickly and powerfully through the pack. Most of the Sheep jammers, however, still don’t have the experience or the footwork to compete with the packs they’re up against. This Saturday, Wheezy is back in the lineup, which is a good thing for the Sheep, but I don’t think it’s fair to expect her to shoulder the entire load of offensive output.
The Sirens have had the Sheep’s number for the past few seasons and with this game being in Indy, the boys in Vegas (or in this case, Flat Track Stats) are saying the smart money is on the ladies in red, who silenced the Sheep in an unsanctioned game just over a year ago, 254-107. Regardless of the outcome, it should be an interesting game to watch, as recent Cincinnati transfer Penn Tupanga is on the Sirens roster, and Maiden America, usually a key part of the Sirens’ jammer rotation, is bench managing this game.
At this point in the season and where this Cincinnati team is, it’s more about figuring out what are the right pieces to fit together to make a team that can win, so expect more experimentation from the Black Sheep on Saturday night. I guarantee you right now, not everyone that is on this Sheep team will be here come playoffs, and I expect a few players to make the jump from the Lambs up to the A squad.
The Lambs had better luck than the Sheep Saturday night, taking the win over Brandywine’s Brawlers, 260-167. I love watching the Lambs this season. To be fair, I love them every season, but this year it’s very likely that there will be a good number of players moving back and forth between the Lambs and the Sheep, so each of these games will be incredibly important. The B team games are where the stars of tomorrow play today, and there are some players who are ready to break out. 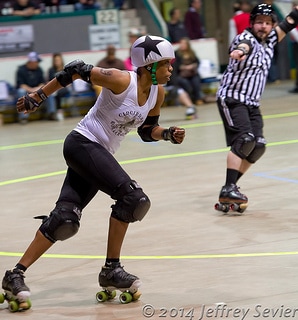 The first name on my list that needs to be moved up to the A team level is Tru D. Vicious (right). She has looked great every time I have seen her play this season, and she just keeps getting better and better. She has the athletic ability to pull off apex jumps and is putting in extra time before practices to learn the tricks that separate the great jammers from the good jammers. Mark my words: She is going to be part of the machine that gets CRG back on track.
The Lambs have looked really good this season and are concentrating on keeping their penalties down. There is a good core of veterans on this team and since their opponents are other B teams, the things they are learning in practice regarding skate skills and walls are going to pay off more quickly for them then for the Sheep who are playing more experienced, athletic competition. 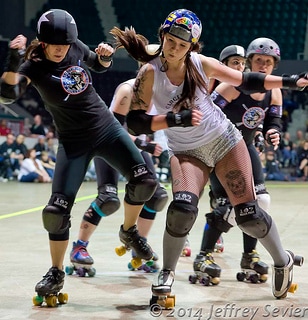 In the pack, I had a fun time watching Poppy Chulo, who did a great job of smashing the other team’s jammer at the right time and allowed her teammates to reset and hone in on them. Also, it was really cool to see 18-year-old Skunna Hurt (left) play in her first game for the Lambs. The high school senior is very athletically impressive and was able to hold her own against women in their 20s and 30s. If she studies the game and learns from the older players around her, she is going to be a solid asset for the team.
The Lambs will be taking on the Warning Belles as well this Saturday night. Since it’s a B team game, the outcome is harder to predict due to player turnover, rookies and the limited information that is available for B teams. With how the Lambs are playing, they definitely have a shot of walking away with a win here, or at least a closer game than the Belles’ 313-62 drubbing of the Lambs a year ago.
The first half of this season is going to be tough, as the upcoming schedule doesn’t have any guaranteed wins on it. But you’re going to want to stick with this team, as they’re improving with each game. These are the times that test teams and their fan bases, when the chips are down, but I wouldn’t jump off the bandwagon if I were you. Down the road, this team is going to click, and when they do, it’s going to be something special.
-Tank
Check back soon for stats from the March 8 home opener.
For ticket information for the March 15 double-header in Indianapolis, click here.