The Force was strong with the Cincinnati Rollergirls at the team’s fifth annual Star Wars Night on Saturday, April 27, 2019. After suffering a crushing 4-point loss to Steel City Roller Derby’s Steel Hurtin’ just a few weeks before, CRG’s Black Sheep struck back with a decisive 144-point upset victory over the Charm City Rollergirls’ All-Stars, and CRG’s Violent Lambs followed that up with a comeback win of their own over Charm City’s Female Trouble.

This was yet another matchup this season that CRG was not expected to win. Charm City was ranked 58th in the Women’s Flat Track Derby Association’s official rankings, and CRG was ranked 92nd. But Charm City had recently lost to Brandywine Roller Derby, who were in turn defeated by the Black Sheep in March, so CRG skaters and coaching staff were cautiously optimistic going into this game.

As it turned out, they didn’t need to be. Charm City jumped out to an early 6-0 lead in the first few minutes of the game, but once Jas Hubbard got lead in her second time wearing the star and put up a 16-point jam, CRG took the lead and never looked back.

Hubbard, Nuk’em and Loko all put up multiple double-digit jams for the Sheep as their blockers frequently shut down Charm City’s jammers. At halftime, the Sheep led 125-49, but Charm City came out strong in the second half, going on a 10-0 run in the first two jams. But by playing perhaps their most cohesive game yet this season, CRG ultimately won the war, 255-111. 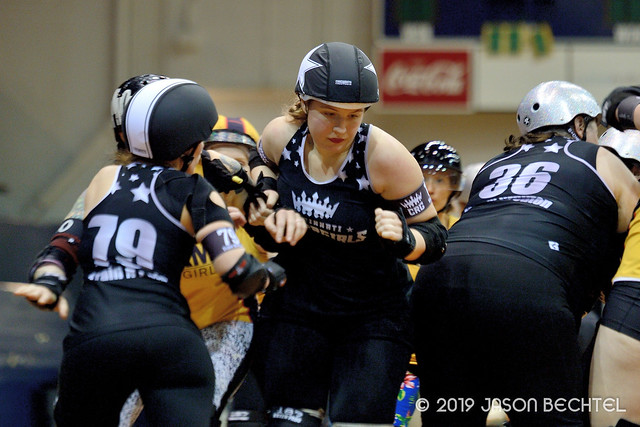 In episode two of this year’s Star Wars Night, the outcome was far from certain, as Charm City’s Female Trouble gave exactly that to CRG’s Violent Lambs. The Lambs lagged behind for almost the entire first half until a 14-point jam by Jillian Dollaz turned the tide with three minutes remaining. At halftime, the Lambs led 114-106, and they maintained their lead for the entire second half to ultimately win it all, 216-161.