Some derby skaters roll onto the track with years of experience under their wheels. But for others, full-contact derby is their first introduction to the sport. For seven-year Cincinnati Rollergirl skater Cherry Choke, the opportunity to start on the team when it was new was perfect timing.

“Since roller derby was a very new sport at the time, even the girls that joined with incredible skating skills were experiencing the same derby learning curve as those of us with no prior skating experience,” Cherry said.
Cherry’s interest began when she attended an informational meeting in 2005 and the first practice in April 2006. For Cherry, CRG offered more than just a hobby.
“After graduating college and experiencing the ‘real world’ for a few years, I was increasingly disillusioned with my advancement in life,” she said. “I just felt that I had reached some sort of limit as to what I could and couldn’t do as a person, as if the choices I had dedicated myself to earlier in life were all that would define me for the rest of it. Derby was a way to force myself out of that mold, and to prove to myself that I could still do whatever I wanted to do if I was willing to put the work in!”
A graphic designer by trade, Cherry finds the branding and promotions companies use interesting, and that’s what inspired her name. “For my skater name, I chose something that was an established brand and put my own twist on it. I even went so far as to create myself a Cherry Choke logo! Over the years I have considered a name change, but at this point I feel about my skater name like I do my real name.”
Even Cherry has frequently served as captain of the Silent Lambs, things weren’t always so easy. It took Cherry almost two years to master the turn-around toe stop. The stop involves a skater turning abruptly and jumping up on their toe stops to, well, stop.
Being an original member of CRG, Cherry has had plenty of time to learn the various derby positions. “I love playing any position, just let me be on the floor helping out my team! Every position comes with its own set of challenges and rewards, but what you learn from playing one always helps you perform better at the others,” Cherry said. Because of her willingness to fill any need, Cherry won a 2011 Wheelie Award for Most Versatile. 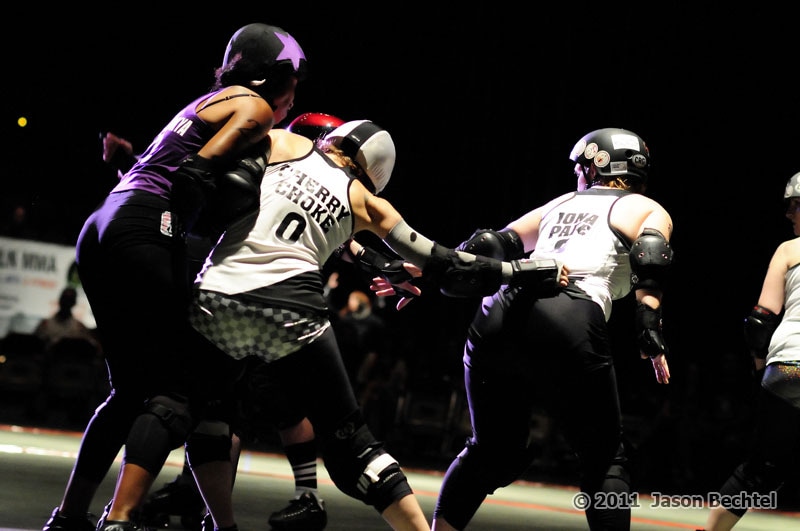 Even though Cherry has been a part of the team since the beginning, she remembers what it feels like to be an inexperienced rookie. For those that aren’t sure about the possibility of joining derby, she says: “We have some amazingly committed individuals who want to help you succeed. CRG also has an extensive rookie/fundamentals training program in place to allow girls to hit the ground skating once they are invited to join the league. It will not be easy, and you may find yourself putting in a lot of extra work, but I have never regretted a moment of the time that I have put into this sport over the years.”
After seven years on the team, Cherry is still feeling the benefits of her dedication to CRG. She finds the most rewarding aspects to be: “The sense of community you get from being part of a team. The amazing places and people I’ve experienced by being involved in CRG. The chance to play in front of roaring Gardens crowds. And not least, the fact that I have never been in such good shape!”
-Karli Wood