Some skaters play roller derby as a hobby – something to do in their downtime. And then, there are the players that live and breathe derby. Whitney Thompson – Nuk’em – is one of those athletes.

A resident of Lexington Kentucky, Nuk’em, drives about 100 miles each way three times a week for CRG practices.
Working as both an in-home caregiver and body piercer, Nuk’em customizes her work schedules around derby. “It’s totally worth it. I have to have it,” she said, laughing.
Nuk’em has been skating since she was five but started playing derby in 2006. When she felt that she had reached a plateau with her team in Lexington, Nuk’em decided to join CRG in 2009.
“When I realized teams play for rankings, and I realized there was a bigger picture, I wanted to be part of it. I wanted to travel and represent a team in a regional tournament,” Nuk’em said.
Representing CRG is what Nuk’em has done ever since. “I worked my tail off to keep my spot, and I haven’t lost it yet,” she said. Nuk’em is a regular for the Black Sheep, and has won the 2011 Wheelie Award for the Hardest Hitter for three consecutive years. According to Nuk’em, it’s the only award she wants to win.
In addition to Nuk’em’s passion for the sport, her boyfriend, now known as Mr. Nuk’em, has joined in. Nuk’em said that initially she’d just hoped he would attend and support her. “He took upon himself, really. I had little to no influence on his decision to start learning the ins and outs of the game and joining the NSO (non-skating officials) crew for CRG. I’m so proud of him.”
Nuk’em, like many other skaters, has an alias that gains attention. When asked about the origins of her name, she responded, “It’s as simple as I used to play a lot of the video game Doom when I was younger. The main character’s name was Duke Nuk’em. (The name) just kind of stuck. Once you make a name for yourself, no matter how goofy or whatever, you can’t change it.”
Nuk’em is also known for her distinct skating style, one similar to a speed skater. She developed the style from a retired speed skater who served as a coach. Due to her training, “I stay low and haul ass,” she said. By doing so, she is able to gain more momentum – key in her ability to hit so hard. 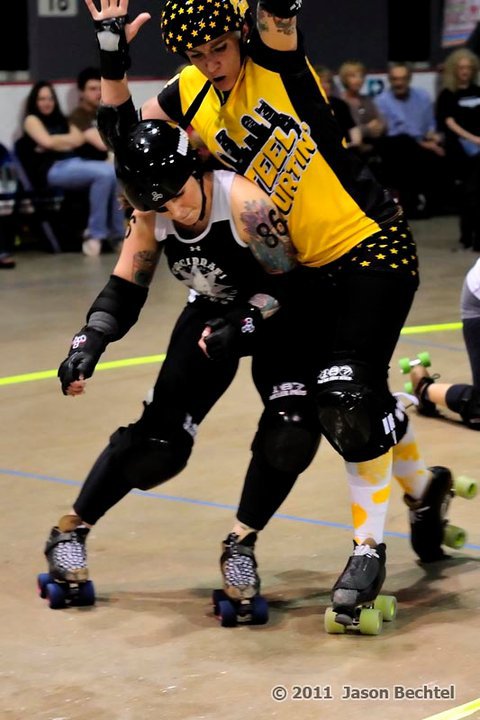 Being versatile is something that takes time for players to develop, but Nuk’em has it down. Her willingness and enthusiasm to play wherever needed shows her dedication to the team.
“The jammer gets all the glamor. That’s the star player up there,” she said. “You definitely feel like the star, but jammers aren’t anything without their blockers. [I play] wherever I can help the team. It’s all fun. You still get to hit people.”
After working so diligently to gain a spot on the CRG roster, Nuk’em realizes the challenges new skaters face and embraces the newcomers.
“I love fresh meat, because when you join such a big team like this, it can be intimidating…I definitely go out of my way to make sure they feel welcomed.” she said. “I love watching these new skaters develop. I love being able to say to them, ‘Man, a year ago you were a mess and now you’re so awesome.’”
Since her beginning at CRG, Nuk’em has acquired experiences that have enriched her skating career and personal life. At an away game in Florida in early 2010, Nuk’em played in a game against the Dallas Derby Demons.
After being down for the entire game, CRG came back at the end to win by two points in the last five minutes. Because of the unexpected triumph, Nuk’em said that 12 of the 14 players got “CRG” tattooed inside of their lower lips that same day. For her, it was the best win she’s had while being on the team, and sparked a surprising tradition where others get the same tattoo.
For Nuk’em, there are multiple aspects that go into her love of derby and CRG. “The sisterhood. The experiences. The traveling. It’s more than just a sport, it’s an overall amazing experience. That alone is worth it – just being a part of something bigger.”
-Karli Wood

Going Back To BarbaricCincinnati Wins 2 in Grand Rapids