Cincinnati entered the playoffs in Green Bay as the No. 4 seed and finished fourth behind regional champs Windy City, Minnesota and Madison; those three teams will go on to the championships in Chicago in November. But Cincinnati’s performance at the playoffs this year was much stronger than last year, coming within striking distance of victory multiple times in the two games they lost.

The Black Sheep won their first game, against the No. 5-ranked Brewcity Bruisers of Milwaukee, but not without a struggle: The final score was considerably closer than the Sheep’s 139-71 shellacking of Brewcity at the Cincinnati Gardens in June. 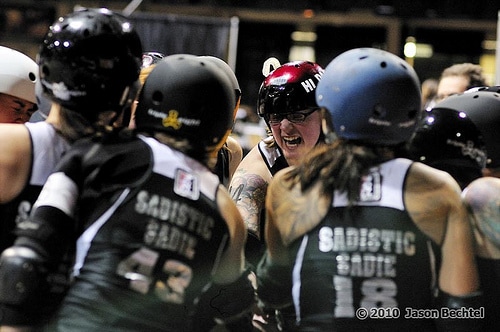 The atmosphere were tense from the moment the Sheep skated out in matching Sadistic Sadie jerseys to pay tribute to their WFTDA-suspended teammate, and an extremely physical game ensued. Cincinnati pivot Sk8r-Kinney and blocker Nuke’m proved to be veritable wrecking balls, while Brewcity’s Servin’ Justice and Moby Nipps frequently escorted Cincinnati jammers off the track.
Although Brewcity took a 3-0 lead after the first jam, Cincinnati quickly took it back with the help of big jams from K. Lethal, Hannah Ouchocinco and Wheezy. But a 10-0 jam from Brewcity’s Rejected Seoul swung the lead to Milwaukee’s favor toward the end of the first half. Although a 14-point jam from Dr. McDerby helped narrow the gap, Brewcity remained in the lead at the half, 80-66.
Cincinnati came out swinging in the second half, retaking the lead with a 21-0 run courtesy of jammers Hannah Ouchocinco and K. Lethal. But Brewcity jammer Carrie A. Hacksaw then did even bigger damage, propeling Brewcity back into the lead, 113-95.
Cincinnati retook the lead when Brewcity jammers fell into penalty trouble and held onto it for the remainder of the game, sealing their win with a 5-0 final jam by K. Lethal as Brewcity jammer Carrie A. Hacksaw watched from the penalty box.

Cincinnati gave Windy City a good scare in the seminfinals, taking the lead numerous times in a game markedly different from the same matchup at regionals last year, when the regional champs won by a whopping 127 points. 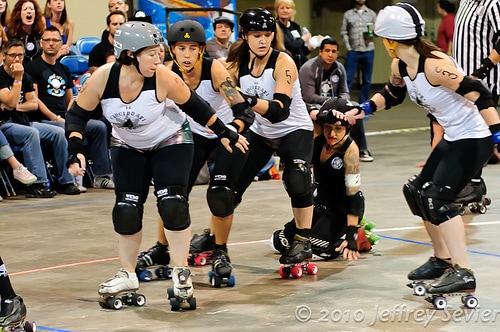 The Sheep took advantage of Windy City jammer penalties in the first half by skillfully slowing the pack and allowing Cincinnati jammers to circle repeatedly, resulting in a 20-0 jam by K. Lethal and a 10-0 jam by Hannah Ouchocinco that put Cincinnati ahead by 22 points. But then a 20-3 power jam by Windy City’s Kola Loka gave the Chicago team a narrow 79-72 lead at the half.
The second half was marked by a brief tie and more lead changes, thanks largely to jammer penalty trouble on the part of both teams. Cincinnati was ahead 123-115 with 15 minutes left in the game after a 15-4 jam from Hannah Ouchocinco, but Windy City steadily took it back with the help of lead jammer calls and power jams. A final 15-7 jam by K. Lethal was not enough to make up the difference.
Despite the loss, the Sheep still had a shot at the WFTDA Championships pending the outcome of the following day’s matchup against Madison.

The Black Sheep’s third game of the weekend was another crowd-pleasing nail-biter that again hinged largely on jammer trips to the penalty box. 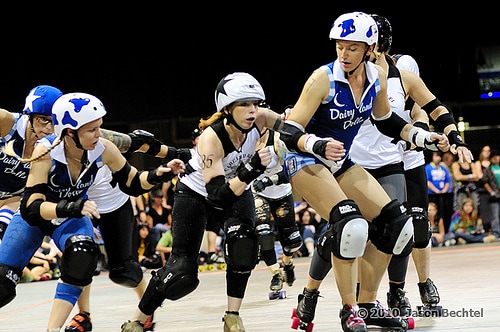 K. Lethal was sent to the box on the very first jam, allowing No. 3 Madison to take an early lead, but Cincinnati recovered with the help of a 14-0 jam by Cincinnati jammer Wheezy, a recent addition to the Black Sheep roster. After a couple more lead changes, Madison had a slight 78-71 advantage at the half.
In the second half, K. Lethal ran into more penalty trouble, allowing Madison to go on a 24-0 scoring run and jump out to a 123-99 lead with just over 13 minutes left in the game. A huge 29-0 jam by Hannah Ouchocinco put Cincinnati in front again, 128-123, but another box trip by K. Lethal – one that caused her to foul out of the game – gave the lead back to Madison, courtesy of Mouse.
When Trauma, jamming for Cincinnati, also went to the box, Madison’s Darling Nikki scored 20 more points to extend their lead to 157-132. Cincinnati called a time out and put Hannah Ouchocinco back out to jam, hoping for another 25-plus points. But despite a valiant effort, she managed just 11 points to Madison’s 7.
The playoffs marked the last scheduled games for the Black Sheep this season. Cincinnati kicks off its sixth home season on March 26, 2011 with a double-header against to-be-announced opponents at the Cincinnati Gardens.